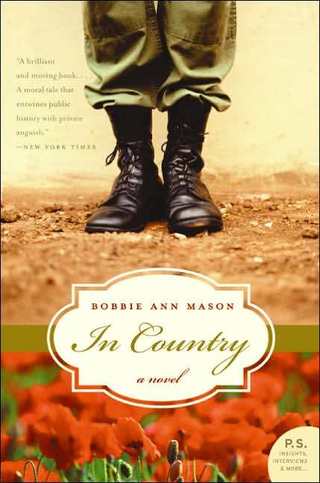 "The size and importance of its subject and the richness of emotion that underpins it make the novel satisfying. It’s as impressive a work of fiction as I’ve read recently, on Vietnam or any other subject." --Robert Wilson, USA Today

The soldier-boy in the picture never changed. In a way that made him dependable. But he seemed so innocent.
"Astronauts have been to the moon," she blurted out to the picture. "July 20, 1969. Armstrong, Aldrin, and Collins. Collins didn’t get to walk on the moon. He had to stay in the command module." Her father never knew things like command module and LEM, she thought, despairing at the idea of explaining to someone the history of the world since 1966. How did teachers do it?
For probably the first time now, it occurred to Sam how amazing it was that men had walked on the moon. Her father had missed so many important events. Watergate, for instance. Sam could not remember exactly what it was about. Her history teacher, Mr. Harris, had said, "The biggies in your lifetime were the moon landing, the assassinations, Vietnam, and Watergate." Mr. Harris said everything was downhill after Kennedy was killed. Sam could probably name all the other assassinations if she thought about it.
"You missed Watergate," Sam said to the picture. "I was in the second grade." She remembered Emmett absorbed in it, watching it on schedule. It was a TV series one summer. When Nixon resigned, Emmett and Irene were ecstatic, but their parents had voted for Nixon and said the country would fall apart if he was forced out. Sam wondered if that was why nobody could get jobs and the world was in such a mess.
She stared at the picture, squinting her eyes, as if she expected it to come to life. But Dwayne had died with his secrets. Emmett was walking around with his. Anyone who survived Vietnam seemed to regard it as something personal and embarrassing. Granddad had said they were embarrassed that they lost the war, but Emmett said they were embarrassed that they were still alive. "I guess you're not embarrassed," she said to the picture.
The face in the picture ruled the room, like the picture of the President on the wall of the high school auditorium. Sam set Sgt. Pepper’s Lonely Hearts Club Band on the stereo.
“You missed this too," she said.

The 2005 HarperPerennial edition of In Country features a Readers Guide, including author interviews, recommended reading, and more.